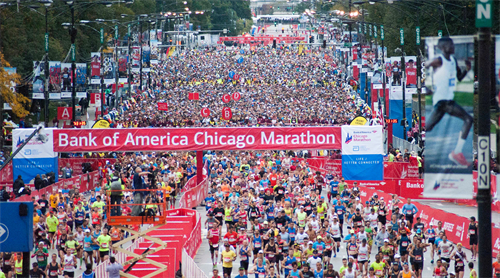 Series XIII of the Abbott World Marathon Majors kicks off at the 2019 Bank of America Chicago Marathon this weekend, with all four defending Chicago champions in town.

Mo Farah, Brigid Kosgei, Daniel Romanhcuk and Manuela Schär are all seeking to retain the race crowns they won in the Windy City 12 months ago, and if they can do so, each will steal an early advantage on the series leaderboards.

For Kosgei, the newly appointed AbbottWMM Series XII champion, an attempt at the world record also beckons. Paula Radcliffe's 2:15:25 (set with male pacemakers) has stood since 2003 when she set the mark on the streets of London.

In 2018 Mary Keitany's bid to beat that time wilted in the heat of the UK capital, just one year after breaking Radcliffe's women's only record with a run of 2:17:01.

Now Kosgei fancies her chances of taking down both marks.

She set a new personal best of 2:18:20 when she won the 2019 Virgin Money London Marathon, torching the rest of a field widely considered to be among the strongest women's lineup ever assembled. In September, she set a new half marathon world record at the Great North Run in the UK with a time of 1:04:28.

The 25-year-old Kenyan has a PB way ahead of her rivals this weekend, and it would seem the clock will be her main opponent.

That's not to discount the challenge of home soil girl Jordan Hasay. Hasay finished third here in 2017 and, after a lengthy injury layoff, came third in Boston in the spring to re-establish herself as one of the key American players.

On the men's side, Farah faces four men with faster PBs than his own 2:05:11 set in Chicago last fall. The Brit was disappointed with his showing in London a few months later, but underlined his form ahead of this race with victory in the Great North Run half marathon in early fall, clocking 59:07.

Boston 2019 champion Lawrence Cherono will pose a threat to Farah, as will Ethiopian pair Herpasa Negasa, and Getaneh Molla, who ran the fastest debut marathon ever, 2:03:34, in Dubai in January.

The Arabian peninsula has already seen points earned in the men's series. In line with AbbottWMM rules, the IAAF World Championship marathon is part of the series. With victory in that race - held in Doha in the early hours of Sunday morning - going to Lelisa Desisa, it's the Ethiopian who leads the way.

For Manuela Schär and Daniel Romanchuk, Chicago marks the start of the defense of their Wheelchair series champions titles.

Schär is going for her eighth AbbottWMM win in a row after taking down every race in Series XII, while Romanchuk returns to the circuit after missing Berlin.

The 21-year-old kick-started his Series XII campaign with his maiden victory on these streets in 2018, and Schär's win was her first Chicago title.

The bonus points competition will once again feature for the wheelchair racers, with a sprint of 400 meters as the athletes approach the 40km mark offering the prospect of eight extra series points and $1500USD for the fastest man and woman through the section, regardless of where they finish in the pack.