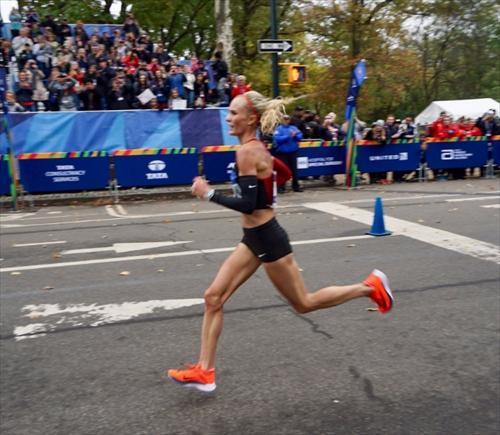 The unflappable Flanagan made her break with just two miles left of an enthralling race and was followed less than half an hour later by Geoffrey Kamworor who mirrored her late move to claim victory in the men's contest ahead of former world record holder Wilson Kipsang.

"I've dreamed of a moment like this since I was a little girl," Flanagan said. "This means a lot to me, and my family and hopefully inspires the next generation of American women to be patient."

Kamworor's first marathon win puts him at the top of the men's leaderboard with 25 points alongside USA's Galen Rupp and fellow Kenyans Geoffrey Kirui, Daniel Wanjiru and Eliud Kipchoge.

After Rupp's victory at the Bank of America Chicago Marathon last month, Flanagan brought more joy to American fans as she pulled off a remarkable win. She's now third in the women's standings alongside Rose Chelimo and Gladys Cherono.

Keitany chased her home to take the runner-up spot, adding 16 Series XI points to the 25 she earned in April when she broke the tape first at the Virgin Money London Marathon.. She's now tied at 41 points atop the leaderboard with her Ethiopian rival Tirunesh Dibaba.

After three New York City wins in a row and a world record in London, Keitany was a firm favorite and it was she who made the first decisive move, breaking up a large field with a significant surge just after halfway that dragged eight opponents clear of the rest.

Nine women crossed the Hudson together and clipped up First Avenue, led by the tall Ethiopian Mamitu Daska. Keitany took up the pace with her compatriot Betsy Saina while Flanagan remained close on their heels alongside former world champion Edna Kiplagat.

It was Flanagan, Daska and Keitany who made the next move as they swung onto Fifth Avenue, the trio opening a gap on Kiplagat that grew to 18 seconds as they passed 35km in 2:03:56.

With the medals decided, it was now all about the order. At this stage, the wise money was still on Keitany, but the Kenyan began to struggle as Flanagan powered to the front, slowly establishing a lead on the two Africans that they simply couldn't match.

Cheered on by the huge crowds, the 36-year-old strode alone through the rain and around the rolling roads of Central Park to cross the line with tears of joy on her face in 2:26:53.

"It took me seven years to do this, a lot of work went into this moment," she said. "I was thinking of people who helped me be in this position, and thanks to the New York Road Runners for this fantastic race and for making this an incredible day. This is going to feel good for a really long time."

Keitany clocked 2:27:54 in second while Daska finished third in 2:28:08 to claim her first Series XI points.
Kiplagat added four points to her tally and is now sixth in the standings while another American, the 30-year-old Allie Kieffer, lowered her personal best by more than 25 minutes to place fifth in 2:29:39. 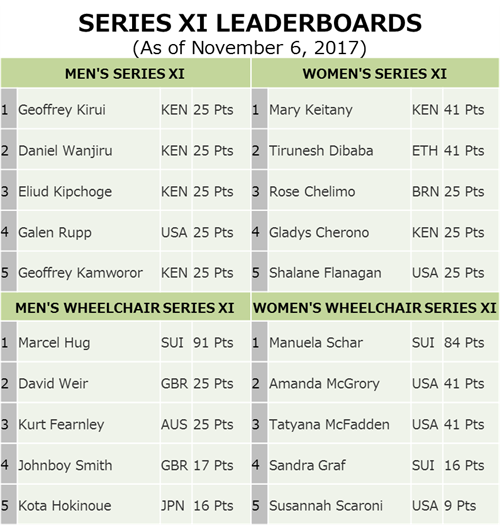