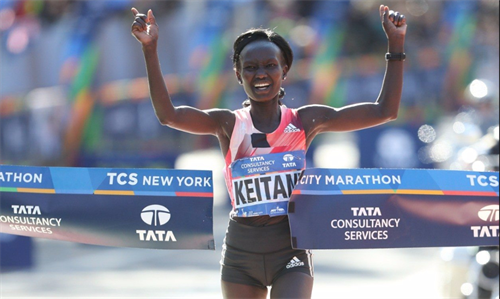 Mary Keitany of Kenya will look to advance to the top of the Abbott World Marathon Majors leaderboard when she defends her TCS New York City Marathon title, on Sunday Nov. 5, as Series XI continues in the Big Apple.

Eritrea's Ghirmay Ghebreslassie, who took his first AbbottWMM win in New York twelve months ago, is aiming to score his first points in Series XI as he defends his title.

Keitany made history as she joined the great Grete Waitz on the event's honors board with her third consecutive victory, one achieved with the largest winning margin for 36 years.

After breaking the women's only world record at the Virgin Money London Marathon this April, Keitany will be favorite to add a fourth straight New York win to her ever-growing career tally and move to the top of the women's Series XI standings.

The 35-year-old is already a two-time AbbottWMM winner after finishing first in Series VI and Series IX. Another 25 points added Sunday would take her above Chicago winner Tirunesh Dibaba to earn 50 points in the 12-month series due to end in the British capital next April.

But Keitany's quadruple is far from guaranteed as she faces some formidable opponents, including compatriot Edna Kiplagat, also a two-time AbbottWMM winner after finishing first in Series V and Series VIII. Kiplagat is also the 2010 New York winner, and a double world champion who lies fifth in the current series after placing second at the 2017 World Championships in London.

The Kenyan pair will have a duo of Ethiopians to contend with, all of whom have fast times and notable victories to their names. They are former Boston Marathon winner Buzunesh Deba, and last year's Frankfurt Marathon winner, Mamitu Daska.

All two will be in the hunt for their first Series XI points, as will USA's main hope Shalane Flanagan who was second in New York on her marathon debut in 2010 and will race the distance on Sunday for the first time since placing sixth in the Rio Olympic final in August last year. 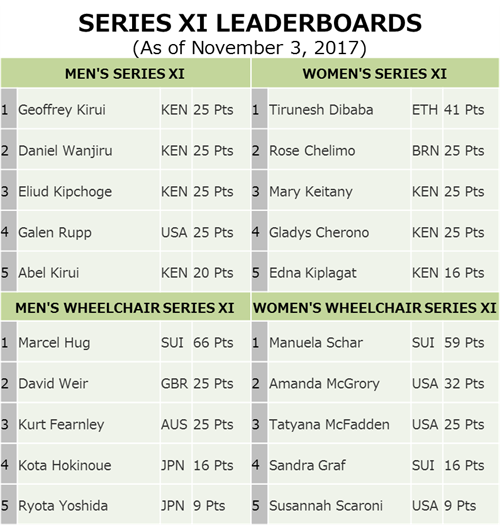