Olympic champion Jemima Sumgong will defend her Virgin Money London Marathon title on April 23 against one of the strongest women's fields ever assembled for a major city marathon. 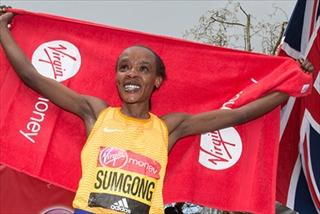 Sumgong defied the odds last April when she recovered from a bruising fall to beat the world's best in the British capital with a devastating finish. The 32-year-old went on to make history in Rio when she became the first Kenyan woman to win Olympic marathon gold. Sumgong defeated Ethiopia's world champion Mare Dibaba in Brazil to confirm her status as the world's number one marathon runner of 2016.

Dibaba, who won bronze in Rio behind Bahrain's Eunice Kirwa, will be one of Sumgong's main rivals in London from a field containing four women who have broken the iconic two hours 20 minute barrier and no fewer than nine who have run quicker than 2:22.

"London is the marathon every runner wants to win," said Sumgong. "I can't wait to return to defend my title."

The quickest on paper is again Mary Keitany who will be aiming to become only the fourth woman to win the London Marathon three times after completing a hat-trick of New York City Marathon titles last November.