Elite Race Recap: Legese leaves them in his wake

The win catapults him into a share of the lead in Series XII, drawing level with Eliud Kipchoge, Mo Farah and Lelisa Desisa on 25 points.

There was plenty of pre-race optimism that today could have seen a Japanese winner in the men's race following Suguru Osako's impressive national record at the Bank of America Chicago Marathon in October. But the 27-year-old had a bad day at the office and pulled out early in the contest.

It cleared the field for a three-way fight between last year's champion Dickson Chumba, his fellow Kenyan Bedan Karoki and the Ethiopian Legese.

At halfway there was nothing between the trio, but as they continued to battle through the elements Legese began to look the stronger athlete.

Chumba cracked at the 30km point as the pacemakers made way, and Karoki gradually began to struggle with the pace Legese was setting.

By 35km, Legese had clear water and, as he made the turn with the grandeur of Tokyo Station in the background, he was on his way to clocking the first sub-2:05 marathon ever run in the month of March.

This was Legese's third tilt at the marathon distance, having run 2:04:15 in Dubai in 2018 but labouring to 10th in Chicago in October of the same year.

His compatriot Ruti Aga made it an Ethiopian double as she finally broke her AbbottWMM duck to claim victory.

Aga lived up to her billing as the fastest woman in the field on paper, playing the waiting game until the 35km mark before throwing down the gauntlet to her rivals and upping the pace. By 40km she had an eight-second lead and her final winning margin was over 20 seconds.

Her time of 2:20:40 was some way outside her personal best of 2:18:34, but it was enough to make her the clear leader in the Series XII women's leaderboard with 41 points.

Mary Keitany claimed the crown in Series XI with the same points total as Aga has now, but the Ethiopian could still return to Berlin for the series finale to try and go one better than her second place in 2018 and achieve the maximum 50 points, which puts the ball back in Keitany's court ahead of her appearance in the 2019 Virgin Money London Marathon.

Before that, the Series rolls into Boston where the likes of Edna Kiplagat and Aselefech Mergia will be looking to run their way into the argument at the top of the women's leaderboard.

On the men's side, TCS New York City 2018 champion Lelisa Desisa will be in Boston hunting a second series XII win which would see him strike out on his own at the top of the men's standings. 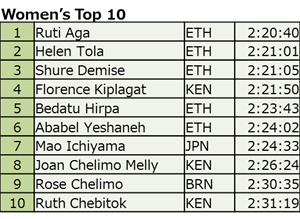 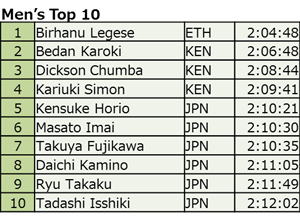 Wheelchair Race Recap: Hug has his day in the wet

Marcel Hug returned to form in spectacular fashion in the rain of Tokyo as he dominated the fourth race of Abbott World Marathon Majors Series XII to come roaring back into contention for the title.

The man they call the Silver Bullet has played second fiddle to series leader Daniel Romanchuk in the last two races, and was second behind Canada's Brent Lakatos in the series opener in Berlin.

But he was not to be denied today in conditions he is famed for excelling in. Hug, Romanchuk and South African powerhouse Ernst van Dyk were together in the early stages of the race but it was not long before the Swiss star began to test his rivals' abilities to hang with him.

Hug's superior grip saw him steal an advantage in the gradients of the first half of the race, and the chasing pair were soon little more than specks in his rearview mirror.

Hug was also the fastest racer through Tokyo's 1.3-kilometre bonus point segment to plunder an extra eight series points added to his 25 for the win to cut Romanchuk's lead to two with three races to go.

It was not all gloom and doom for the 20-year-old American, who clung on for second place and also received the AbbottWMM Six Star Medal having completed the full set of six Majors.

Manuela Schär underlined her seemingly unstoppable form by claiming her fourth consecutive win of Series XII.
Schär suffered in similar conditions to this in Boston in 2018, but today the rain could not deter her from grabbing both the win and the bonus points.

She has an eye-watering 76-point lead at the top of the standings, which means she could effectively sit at home watching the next two races with her feet up and still be in the lead at the end of April.

Instead, she will plough on to Boston and London in April in a bid not only to put the series out of reach, but also to seek the title of world champion in London, where the Virgin Money London marathon will double as the IPC World Championship.

Schär was already a few chair lengths ahead of the American pair as they made the turn to tackle the bonus point section, and she eventually broke the tape almost two minutes ahead of Tatyana McFadden, who took second place ahead of her Illinois stablemate Susannah Scaroni.