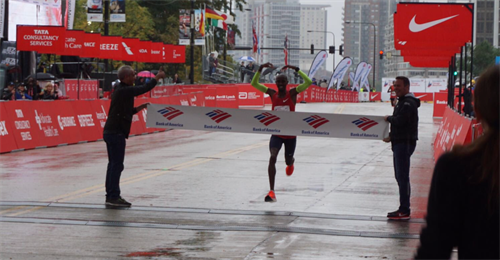 Mo Farah stormed to victory at the Bank of America Chicago Marathon to claim his first Abbott World Marathon Majors win.
The four-time Olympic champion on the track used that famous finising speed to kick away from Ethiopia's Mosinet Geremew as he turned onto the incline of Roosevelt Road, before cruising on to the home stretch of Columbus Avenue and taking the tape in his famous 'Mobot' pose.
Farah's time of 2:05:11 saw him lower the British record he set at the Virgin Money London Marathon in April and also claim the European Record.

Japan's Suguru Osako was third in a new Japanese National Record of 2:05:50, a time which came with a 100 million Yen ($1 million) bonus.

For Farah, this was the culmination of applying the lessons learned from his third-place run in London last April, where a first half of 61 minutes took its toll late on.
"I am definitely better off going slower in the first half," said the Briton, who clocked around 63 minutes for 13.1 miles this time. "I know I can mix it now and run a decent time. To come away with a win is great, but I think I can go a lot faster."

There was another first-time win on the women's side with a crushing performance from Kenya's Brigid Kosgei. The 24-year-old waited until the 30km mark before unleashing a break that none of her rivals could handle.
It was enough to end her run of second place finishes, one of which was achieved in Chicago last year, as she romped home in 2:18:35, over two minutes clear of Ethiopia's Rosa Dereje. Shure Demise was third in 2:22:15.

Both Farah and Kosgei now draw level at the top of the AbbottWMM Series XII standings with 25 points each alongside Eliud Kipchoge and Gladys Cherono respectively.
The Series resumes on the first weekend in November with the TCS New York City Marathon. 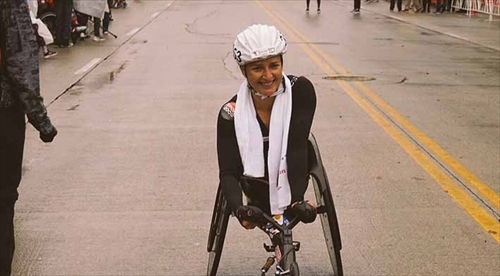 Manuela Schär continued her dream start to the AbbottWMM Series XII with victory at the Bank of America Chicago Marathon.
The Swiss star battled to half way with Australian Madison de Rozario before her strength allowed her to pull clear in the wet conditions and romp home by over a minute.
Schär's form was obvious to all after she smashed the world record at the BMW BERLIN-MARATHON in September and she underlined that here with her first win in Chicago.
De Rozario snatched the eight points for the wheelchair bonus competition which was at the halfway mark to move into second place in the overall Series XII standings, but Schär's lead has now stretched out to 34 points with just two races gone.
She next heads to the TCS New York City Marathon where she won comfortably last year.
Susannah Scaroni continued her promising start to the Series with third place adding to her second place in Berlin.

In the men's wheelchair race, there was joy for the home crowd as local favourite Daniel Romanchuk claimed his first victory.
The 20-year-old, coached at the nearby University of Illinois, did battle with two titans of the sport in Marcel Hug and David Weir and emerged triumphant for the first time against his vastly experienced foes.
Having bested them for the eight bonus points at the midway point, Romanchuk hung with his fellow front runners the whole way. When the hammer came down from Hug as they ascended Roosevelt Road, Romanchuk responded with those enormous arms and was able to edge ahead of the Swiss superstar in the sprint for the line.
Weir had to settle for third, while Romanchuk now has a slender one-point lead in the Series XII standings - and a huge injection of confidence that he has truly arrived.