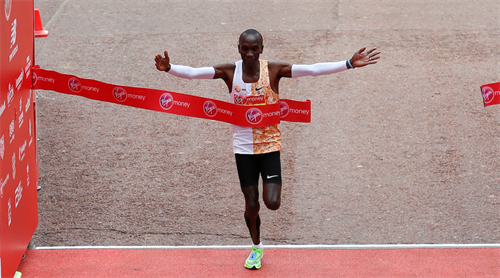 The Kenyan stopped the clock at 2:02:37 to claim the second fastest time in history, to add to his 2:01:39 world record set at the BMW Berlin Marathon in September 2018.

Kipchoge controlled the race from start to finish and swiftly put to bed the pre-race talk that home crowd hopeful Mo Farah would present his strongest challenge.

The Briton was in touch with the leaders until halfway, but the sub-2:03 pace being set was way in advance of Farah's sub 2:06 run. That brought him the Bank of America Chicago title in October.

As Farah fell away, the leading group was down to Kipchoge and Ethiopian trio of Shura Kitata, Mosinet Geremew and Mule Wasihun.

Kitata, who had been out-kicked by Lelisa Desisa to finish second at the TCS New York City Marathon in November, was surprisingly the first to crack, losing touch as they attacked the gradient taking them on to the Embankment.

It looked at that stage as though Kipchoge had a sprint on his hands. But he has been here so many times before, and he threw in his fastest mile of the race, a 4:30 for the 25th mile segment.

It was enough to see his final two challengers fade into his rear-view mirrors and leave the king of the marathon to soak up the adulation of the grandstands on The Mall.

As he did so, he wrote another chapter of his incredible story to run the first sub 2:03 marathon seen on the streets of London and confirm what everyone already knew: he is the greatest marathon runner of all time.

There was double delight for Kenya as Brigid Kosgei claimed the women's race in a personal best 2:18:20. The Bank of America Chicago Marathon champion has out herself in a strong position to take the AbbottWMM Series XII title when the series finishes in Berlin in September.

The first half of the women's contest was run at a surprisingly slower pace than expected, but when it began to break up, Kosgei and defending London champion Vivian Cheruiyot were left as the two athletes fighting it out for the lead.

As the pace quickened, Kosgei was able to desert her rival at the second attempt to get away, and the gap quickly became un-bridgeable for Cheruiyot.

All that was left for Kosgei to do was beat the clock, which she did with room to spare underneath her Chicago time of 2:18:35. 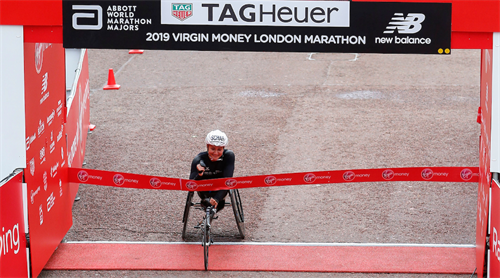 Manuela Schär made history at the 2019 Virgin Money London Marathon with another crushing victory.

London is her sixth consecutive Abbott World Marathon Majors win, making her the first athlete to accomplish the AbbottWMM grand slam. She can now make even more history if she ends the series with a seventh win back in Berlin in September, where her winning streak began in 2018.

The Swiss star made light work of her rivals on London's roads. For a short time she had American Tatyana McFadden for company, but the race soon adopted the same pattern as most of the other contests in Series XII, with the 34-year-old simply proving too strong and too fast.

By Tower Bridge, she was on her own and heading for the new addition to the series, the bonus point section. In London this was coined the Flying 400 and had the extra incentive of a $10,000 prize attached to it for the fastest wheelchair racers through the section.

Schär, having already won the maximum three bonus contests in this series already, could only block her rivals from scoring, but the cash was hers to plunder, which she duly did, clocking 51 seconds to edge out Australia's Madison de Rozario, who collected the second fastest prize of $5,000 with 53 seconds.

All that was left was for Schär to keep her wheels in touch with the tarmac, which she was able to do to coast to yet another victory and earn herself a piece of sporting history.

McFadden followed - over five minutes later - as she outsprinted De Rozario for second.

In the men's wheelchair race, the changing of the guard continued as Daniel Romanchuk sealed his fourth win of the series to maximise his points tally and slam the door on Marcel Hug's hopes of catching him.

The American exchanged the lead with Hug on several occasions as they broke clear along with Japan's Tomoki Suzuki and the race was shaping into one of London's typical sprint finishes.

But on the final turn, Romanchuk cranked those massive arms into gear and his burst was too much for Hug to live with.

The reigning series champion had no reply and had to settle for watching his crown disappear down The Mall.

This was Romanchuk's first Majors victory outside his home country, another test passed for a young man who seems to be answering every challenge posed to him at present.

The action in London brings the curtain down on the Spring series of AbbottWMM races before the focus shifts to Berlin in September where the fast and flat roads of the German capital will provide the stage for the finale to what has been a thrilling Series XII so far.