Eliud Kipchoge will bid for his fourth Abbott World Marathon Majors win in Tokyo on Sunday.

The world record holder and double Olympic champion is bidding to become the first able-bodied athlete to win all six AbbottWMM races.
Kipchoge's last appearance was also in Japan as he swept to a second Olympic gold in Sapporo. The conditions then were sweltering, but the weather is predicted to be close to perfect on Sunday, raising hopes for a fast time from the four-time AbbottWMM Series champion.
Kipchoge's task has been made somewhat less challenging by the withdrawal of reigning Tokyo champion Birhanu Legese, the world's third quickest marathon runner of all time.

Mosient Geremew sits just behind Legese on that all-time list and will provide perhaps the stiffest test to Kipchoge's ambitions. The Ethiopian set his sights on 2:03:30 in Friday's press conference, which would be a new course record. Kipchoge kept his time ambitions to himself, instead predicting a strong race. 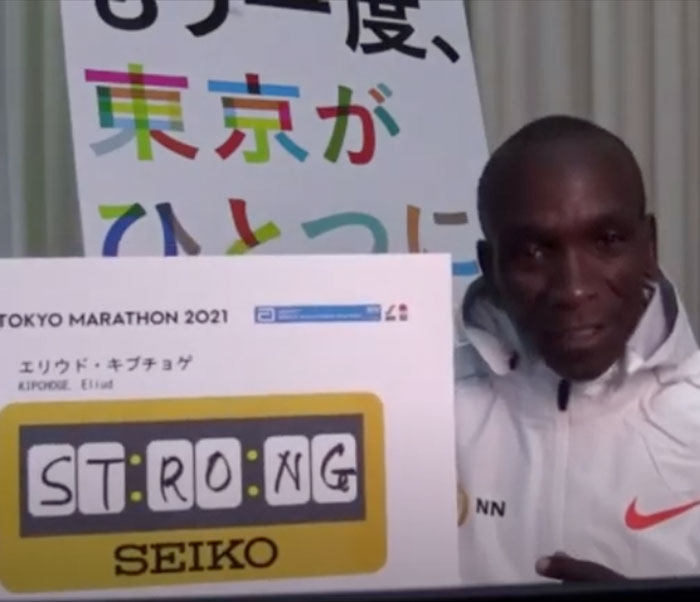 Kipchoge played his cards close to his chest when asked for a time prediction for Sunday's race.

There are five more men with personal bests below the 2:05 barrier, Kenya's world bronze medallist Amos Kipruto is also in action, Ethiopia's Olympic and world medallist Tamirat Tola, Jonathan Korir of Kenya, Ethiopia's Shura Kitata and Japanese record-holder Kengo Suzuki, who ran 2:04:56 to win the Lake Biwa Marathon last year.
Kitata is in fact the only man to have won a Major in which Kipchoge was also present since 2013. The Ethiopian triumphed at the 2020 London Marathon when Kipchoge suffered from a blocked ear, finishing eighth.

In the women's race, all eyes will be on Kenya's Brigid Kosgei, who set a new mixed world record at the Bank of America Chicago Marathon in 2019 when she ran 2:14:04. That was part of a four-race winning streak (two London and two Chicago titles), and she added Olympic silver in Japan last summer.
She will go up against her compatriot Angela Tanui, who won last year's Amsterdam Marathon in 2:17:57, a time that places her 10th on the all-time list, and Ashete Bekere, the 2019 Berlin champion.

The USA's Sara Hall also returns to a race she ran in 2017. Her personal best set in 2020 of 2:20:32 is more than eight minutes faster than the time she ran in the Japanese capital that year, and she comes to Tokyo buoyed by her new American half marathon record set in Houston in January.

Find out how you can watch the Tokyo Marathon 2021 here.