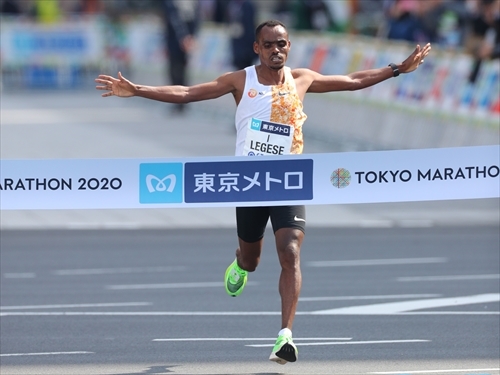 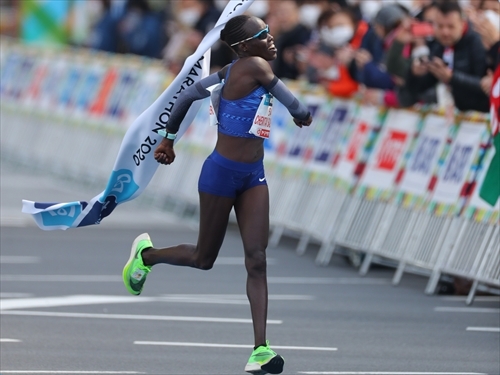 It was sunny with a temperature of 11.5 degrees Celsius and humidity at 46.4%. Sweats were very noticeable from the athletes at the 10km mark, but the temperatures remained mild, and the race went on under good weather conditions.

In the men's race, the defending champion Birhanu Legese (Ethiopia) highlighted his second consecutive win with the time of 2:05:15. He expressed his pleasure with the results commenting, "I'm very happy. There was a slight wind, but the weather conditions were better (than the rain from last year)." At the post-race press conference, he revealed that he began experiencing pain in his left leg around the 30km mark. He explained that he decided to change his strategy, "I was trying to run in under 2:03:30, but it was difficult to move forward with the pain. I shifted my target to win, rather than focusing on my time."
The leading pack included 12 to 13 athletes until the half-way point, marking 29:12 at 10km and 58:41 at 20km, basically the same pace as last year. Other athletes found it hard to keep up as the pack picked up speed at the 25 km mark, and when the pacemaker pulled out at the 30km, it was a two-man race against Sisay Lemma (Ethiopia). Legese made a move at the 39km point, leaving Lemma behind as he made his way to the finish.
Bashir Abdi (Belgium) picked up the pace and placed second, with Lemma finishing third.
The Japanese men were competing for a spot for the Tokyo 2020, and Hiroto Inoue ran with the leading pack while Japanese record holder Suguru Osako chose to either run with or behind the group. At the 23km, Osako fell behind, and Inoue had a 10-second advantage. But Osako caught up at the 32km point, and noticing that Inoue was struggling, chose to pull ahead. Taking the lead among the Japanese athletes, Osako ran the 5 km between the 30km 35km in the pace of 14 minutes, moving up the leaderboard. He finished at 2 hours 5 minutes 29 seconds, bettering his own Japanese record by 21 seconds, and placing fourth overall. He shouted in joy, punching the air with his fists as he crossed the finish. "I was able to set a new Japanese record to move on to the next stage. I'm glad I was able to give it my all." You can see that he was overwhelmed with emotion through his eyes.
Other Japanese athletes also recorded good times, with Ryu Takaku finishing at 2:0645, Daisuke Uekado marking a personal best at 2:06:54, and other 7 athletes, including Toshiki Sadakata, finishing under 2:08. The former Japanese record holder, Yuta Shitara placed 16th with a time of 2:07:45, and Inoue who had kept up with the leading pack until the half-way point finished at 2:09:34, placing 26th.

In the women's field, Lonah Chemtai Salpeter (Israel) won with a time of 2:17:45 improving the course record by more than 2 minutes. She ran at a fast pace from the very start, running head to head with Birhane Dibaba (Ethiopia) who has the record in winning the event twice. Salpeter didn't pick up the pace consciously and commented about keeping her own pace until the end. With satisfied expression she commented, "I was running intuitively when I noticed there weren't any athletes around. It feels good to be able to break my personal best with such a good race.". Second place finisher Dibaba also finished with a remarkable time of 2:18:35.
Haruka Yamaguchi was the top Japanese female athlete, crossing the finish line at 2:30:31, placing 10th overall.