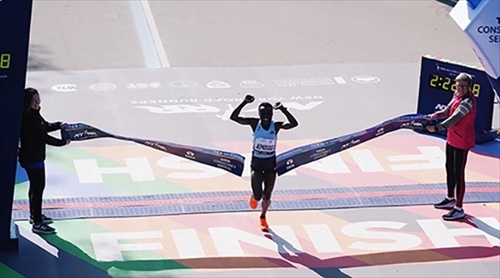 The 26-year old became the youngest woman this century to win in the Big Apple, taking the tape in a time of 2:22:38, but perhaps even more impressive is that the unforgiving course was where she chose to make her 26.2-mile debut.

The half-marathon world record-holder had won here in the spring in the United Airlines NYC Half marathon and looked comfortable throughout as the surges came and went from her rivals.

American Desiree Linden was the first woman to thrown down the gauntlet as she created a 13-second lead at the 11-mile mark, but she was eventually swallowed up as the east African contingent of Jepkosgei, Keitany and Ethiopia's Ruti Aga imposed themselves on the race.

They had ended Linden's brave challenge by the halfway point and it was Tokyo 2019 champion Aga who next began to struggle, falling off the pace with five miles to go to clear the way for a straight shoot-out between the 37-year old Keitany and her compatriot, 11 years her junior.

Keitany, who has won here on four occasions and destroyed the field here in 2018, was the heavy favourite to use all that experience to claim victory number five, but she could not shake off Jepkosgei, and as the final miles ticked by, it was the debutant from Iten who made the decisive break.

A four second gap at 23 miles became a 13-second chasm at 24 miles, and despite the strain beginning to show on her face, Jepkosgei's legs kept her going as she entered Central Park for the final time to soak up the roars of the home straight crowd and announce herself as a major player on the AbbottWMM circuit.

In the men's race, defending champion Lelisa Desisa lasted no more than five miles among the leaders before throwing in the towel. With less than a month passing since his world championship win in Doha, this was always going to be a tall order for the Ethiopian.

His departure left the field clear for 2017 champion Geoffrey Kamowror to try and reclaim his crown.
The Kenyan sat tight as forays from Shura Kitata and Brett Robinson proved fruitless in attempting to draw him out.

Kitata began to falter as the race entered the final four miles and it was left to Kamworor, Tamirat Tola, Albert Korir and the unheralded Girma Bekele Gebre to take the race home.

With three miles to go, Kamworor pulled the trigger on a burst that no one could answer.

Korir managed to cling on to second place despite visibly beginning to struggle. He fended off the fast-finishing Gebre, who had not event started with the first elite wave, to complete the podium.

Kamworor really never looked troubled throughout a race that he chose his moment to win, and he coasted home to stop the clock at 2:08:13.

He has long been tipped as the heir to the throne of his NN Running Team stablemate Eliud Kipchoge, who was at the finish line to congratualte him.

Two wins in three years here and his recent new half marathon world record suggest has a decent shot at living up to that hefty tag.

※Yoshiki Takenouchi, who was the only Japanese elite athlete in men's elite field, finished 8th (2:11:18). 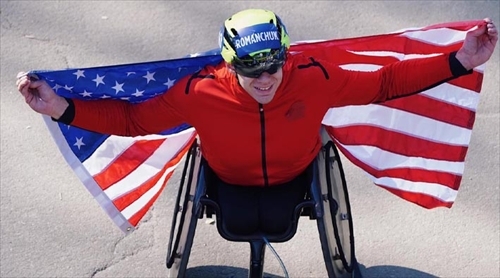 Daniel Romanchuk and Manuela Schär retained their TCS New York City Marathon titles with two contrasting victories in the 2019 renewal of the race.

Romanchuk, who collected his first AbbottWMM Series crown in September, looked set for a relatively easy day at the office as he opened an early lead over Switzerland's Marcel Hug, but the veteran hauled the 21-year-old back in before they reached the 20km mark.

That triggered a sprint for the eight bonus points on offer before halfway, and Romanchuk claimed the spoils in a tight race across the timing mats before the rest of the race played out.

It appeared to be a straight fight between the pair until the appearance of Britain's David Weir and Romanchuk's team mate Aaron Pike, setting up a four-way scrap for the podium as they rolled into the final miles.

Pike fired the first shot as he took the lead, but Romanchuk - gaining racing smarts with each of these battles he finds himself - knew the best place to be as they made the last turn was out in front.

As the former Bennett Blazer began to crank up his arm speed, Pike was first to lose ground, with Weir next to drop off.

Only Hug could stay in the Illinois athlete's slipstream, but there was no way around him as they powered up the final hill, and Romanchuk burst through the tape in 1:37:24, just one second ahead of his fierce rival.

If Romanchuk's victory was by the thinnest of margins, Schär's ninth win in a row could not have been more different.

Traditionally here she has found the gradient of the Verrazzano Narrows Bridge a struggle, giving ground to the power of Tatyana McFadden. On this occasion, the defending series champion had no such trouble.

She was free and clear by almost half a minute by the time she reached the three-mile marker, and did not look back.

The eight bonus points at 20km were comfortably pocketed and she sailed through the second half of the race with no one but the crowds on the pavements for company.

Her winning time was 1:44:20 with a margin just two seconds shy of a full four minutes, and this victory completed a hat-trick of New York City triumphs.

It's now been 414 days since she began her winning streak in AbbottWMM marathons, and she will be going for a perfect ten straight Majors victories when the series resumes in Tokyo in March of 2020.

■Please enjoy the highlights from the NYC Marathon!
Thank you New York

New York City, you know how to throw a party. We'll do it all again next year!