Elite Race Recap: Legese leaves them in his wake 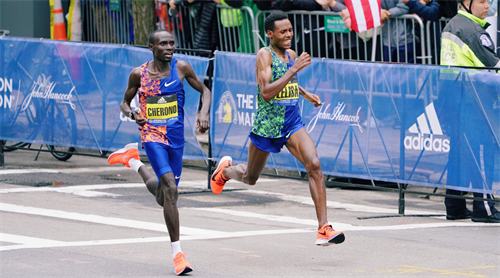 Kenya's Lawrence Cherono won a race for the ages at the 2019 Boston Marathon as he pipped Ethiopian Lelisa Desisa on the finish line.

The pair were side by side with Cherono's compatriot Kenneth Kipkemboi also in contention as they rounded the final bend for the last charge along Boylston Street, and it was Cherono who found the strength to outlast the New York City champion as Kipkemboi fell away.

The contest saw a large group stay intact deep into the race, with Americans Jared Ward and Scott Fauble often muscling their way to the front to push things along.

Torrential rain and high winds prior to the start had threatened to play havoc with the field, much like 2018, but conditions improved soon after the gun for the race to unfold with the expected favourites to the fore.

2017 champion Geoffrey Kirui was another name prominent until the late miles when Cherono, Desisa and Kipkemboi finally managed to shake off the rest of the pack. They stuck together into the final mile, and the smart money may justifiably have been on the Ethiopian given the manner in which he had won in New York just over four months ago.

With the Virgin Money London Marathon just around the corner, it will fall to Eliud Kipchoge and Mo Farah, both on 25 points, to try to overhaul Desisa with a first or second place on The Mall.

The women's race provided no such finish line drama as Worknesh Degefa pulled clear early on and never looked back.

The Ethiopian was making her Majors debut, and had even foregone the chance to recce Boston's notorious hills ahead of the race. But it mattered not as she stretched out to a three-minute lead at one stage of the race.

That pace told on her in the second half, and it was left to veteran and 2017 champion Edna Kiplagat to conduct a one-woman chase. The 39-year-old narrowed the deficit to under a minute by the finish, but ran out of tarmac to complete the catch.

Degefa had come into the race having won Dubai in January and boasted the fastest PB of the field. Having confirmed her credentials on Boston's unforgiving course she must now be considered a key player on the AbbottWMM circuit.

For now, she joins Gladys Cherono, Mary Keitany and Brigid Kosgei on 25 points, all of them chasing Ruti Aga on 41. 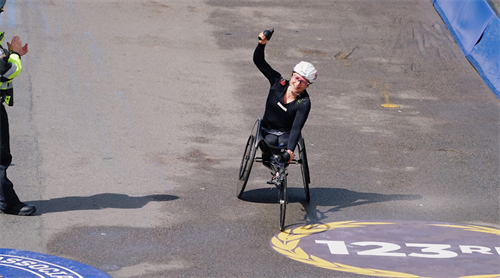 Daniel Romanchuk extended his lead at the top of the Abbott World Marathon Majors Series XII leaderboard with a convincing win at the 2019 Boston Marathon.

It was Romanhcuk's first win in Boston and he became the first American to win the men's wheelchair division since 1993. The 20-year-old didn't handle the first downhill section well and the early lead was shared by veteran Ernst van Dyk and American Aaron Pike.

But Marcel Hug, Masazumi Soejima and Romanchuk soon reeled that pair in and began to break away.

Romanchuk put in a burst towards the halfway mark where he was able to collect the eight AbbottWMM bonus points and from that point his lead never came under threat.

Hug's victory in Tokyo had taken a significant chunk out of Romanchuk's Series XII lead and there were two points in it coming into today's clash.

But with a full 33-point haul from this win, Romanchuk's advantage has now been widened to 26, with Soejima separating the winner and Hug who trailed in third.

The women's race was yet another tale of Manuela Schär competing against herself. The reigning Series champion had failed to finish here in the freezing conditions of 2018 but she would not be denied today.

She stole a large advantage immediately in the downhill section and was clear of the rest long before the Newton hills could give them a chance to eat into her lead.

With the win and the bonus points from today, Schär has achieved the maximum points possible in this series, and now heads to London bidding to make it six wins in a row in the Abbott World Marathon Majors.