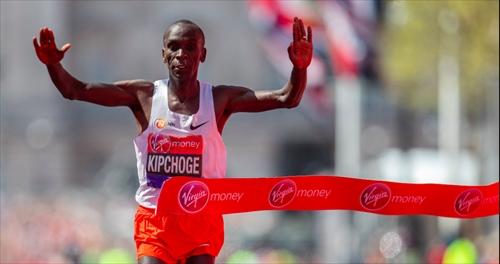 Reigning Abbott WMM champion Eliud Kipchoge will start the defense of his crown at the BMW BERLIN MARATHON on September 16.

The Kenyan has claimed the last three Abbott WMM Series titles and has two Berlin victories under his belt, the most recent of which in 2017 set him up for his hat-trick of series triumphs.

Kipchoge put the seal on Series XI with a win in the 2018 Virgin Money London Marathon in April when he outlasted the field in baking conditions to claim the $250,000 first place prize for the Series.

In Berlin last year the 2016 Olympic champion was pushed hard by marathon debutant Guye Adola until the late stages saw him pull away before passing underneath the Brandenburg Gate alone.

The Berlin course has produced a catalogue certified world records in the elite men's field, none of which have been set by the great man, who is yet to add that achievement to his glittering CV.

Kipchoge will be challenged by fellow Kenyan Wilson Kipsang, whose world record of 2:03:23 was set on Berlin's streets in 2013, only to be eclipsed by the 2:02:57 of Dennis Kimetto 12 months later.

Ethiopian Zerensay Tadese has also been named in the lineup to take on the famously fast course on 16 September when Series XII gets underway. The current half marathon world record-holder set his mark of 58:23 in Lisbon over eight years ago.