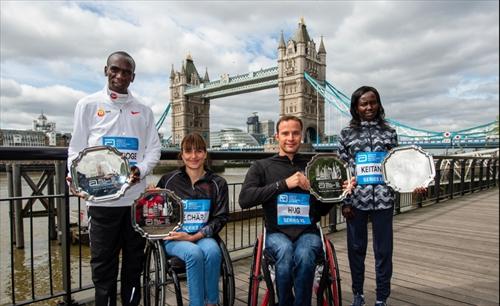 Since the start of the Series at the Virgin Money London Marathon in April 2017, each champion of each race in both the open and wheelchair categories has been invited to nominate a cause to which AbbottWMM donates $10,000 on their behalf, an initiative that will resume when Series XII starts in Berlin on 16 September.

In Boston, women's champion Desiree Linden picked 826 Boston, a youth writing and publishing organization that empowers traditionally underserved students ages six to 18 to find their voices, tell their stories, and gain communication skills to succeed in school and in life.

Her fellow winner in the men's race, surprise winner Yuki Kawauchi, chose the Saitama Greenery Trust in the Saitama prefecture north of Tokyo.

After battling through the winds and rain, women's wheelchair champion in Boston, Tatyana McFadden, nominated The Play Brigade, a collective of volunteers, corporations and community leaders dedicated to creating opportunities for inclusive play, recreation, and sports.

And on behalf of Boston men's wheelchair winner Marcel Hug, $10,000 was donated to Haiti Rehab Switzerland, a non-profit association for the support of people with spinal cord injury in Haiti.

The Series swiftly moved on to London six days later where Eliud Kipchoge's victory saw him choose Able Child Africa as the recipient of the donation in his name.

They are the leading UK charity to work exclusively with and for disabled children and their families in Africa providing direct services such as health and education as well, as engaging in advocacy and influencing work in the UK and internationally.

Women's champion Vivian Cheruiyot directed her donation to Laureus. They support more than 100 sports-based community programs in 35 countries to combat social challenges facing children and young people, such as violence and crime, discrimination, lack of education, unemployment and preventable diseases.

The Academy provides athlete and coaching support and expertise across all levels and abilities including working with schools in South London, Surrey, Sussex, and Hampshire; working with clubs and coaches from the South East and providing access to the Academy for international development for under-resourced counties. Their mission is to be an academy which is the center of excellence for disability athletics, helping disabled people achieve through sport.

Following her first ever AbbottWMM race win, Australian Madison de Rosario chose Get Kids Going!, a UK-based charity which gives disabled children and young people - up to the age of 26 years - the opportunity of participating in sport. Supporting children with all disabilities and from all backgrounds they take pride in ensuring that any equipment which is out-grown is recycled to other children.

The final round of donations brings the total handed to good causes to $280,000 in Series XI.
General Manager Tim Hadzima said: 'The charity program added for Series XI has brought another dimension to the impact the Abbott World Marathon Majors has around the world.

'We give our champions the chance to nominate causes close to their hearts, and to see the incredible work these organizations do makes us proud to be able to support them in this way. We are excited to see the long term impact that we can have with his program.'