[Report] Chumba and Dibaba win the Tokyo Marathon for the second time, while Yuta Shitara sets the national marathon record 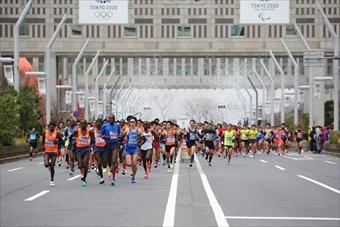 Men's winner was Dickson Chumba, who won in 2014, while women's winner was Birhane Dibaba, who won in 2015. In the history of the Tokyo Marathon, no men or women ever won the Tokyo Marathon multiple times. Thus by winning the Tokyo Marathon this year, both Chumba and Dibaba made history.
That is not all. Chumba's winning time of 2:05:30 is the second fastest time in the Tokyo Marathon history behind 2:03:58 recorded by Wilson Kipsang last year. "I missed recording a 2:04 marathon, but I am still happy with my time. Next year, I would like to return to Tokyo to run a 2:04 marathon," promised Chumba. Wilson Kipsang, the defending champion and the favorite for the race, started walking around 16.5km and eventually dropped out of the race, but Chumba did not notice it at the time. At 30km, when the pacemakers left the race, Chumba started to push the pace, and after 35km, he further increased the tempo to break away from Gideon Kipketer and Amos Kipruto. Chumba won comfortably with 2:05:30. Shitara, who finished second with 2:06:11, recorded the national marathon record. In all, five runners cracked 2:07, while 14 runners cracked 2:10. Among those who cracked 2:10, nine of them are Japanese.

Dibaba's winning time of 2:19:51 is also the second fastest time in the Tokyo Marathon behind the last year's winning time of 2:19:47 by Sara Chepchirchir. Dibaba also became the 26th runner to crack a magical 2:20 barrier. The lead pack was reduced to four runners by 20km and then to three runners - Birhane Dibaba (ETH), Ruti Aga (ETH) and Amy Cragg (USA) - by 30km. Among them Cragg first lost contact with the leaders before 35km. Dibaba who said, "The weather was great and my leg also felt great. At 35km, I thought I can win this race," made her move and left Aga in her wake. Dibaba won the race with the personal best. "The previous course was tough after 35km, so I am happy to break my personal best today," said Dibaba after the race. Aga who was second with 2:21:19 tied the third fastest time in the history of the Tokyo Marathon, while Cragg in third place recorded more than five minutes personal best of 2:21:42, which is the sixth fastest time in the Tokyo Marathon history. Cragg's time is also the best third place time in the history of Tokyo Marathon.