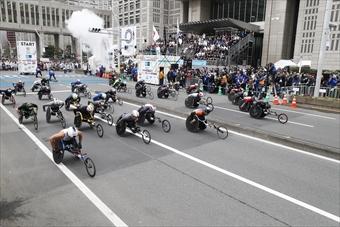 Soon before the 10km into race, the men's wheelchair marathon race became a duel between Hiroyuki Yamamoto and Tomoki Suzuki. A fantastic duel continued for the next 30km and as the race approach the closing stage, both Yamamoto and Suzuki took a turn trying to break away from his competition. Eventually, Yamamoto's sprint turned out to be superior. "I push the pace all the way and won with the final sprint from the younger athlete. It was a great race for me," said 51 years old Yamamoto after the race. Yamamoto won the Tokyo Marathon for the fourth time, after winning it in 2010, 2012 and 2014. He is thus one step closer to the record five victories by the Tokyo Marathon wheelchair marathon Race Director, Masazumi Soejima, who won the Tokyo Marathon record five times. Unfortunately for Suzuki, who was second in 2015 and third in 2017, it was another second place finish this year.

The women's race turned to a duel much later, after the half marathon point. Just before 25km, Manuela Schar of Switzerland and Tatyana McFadden of the United State broke away from their competitions. Then their duel continued for the next 10km. Schar eventually broken away from McFadden and won comfortably. Schar, who finished second with the same time as the winner last year, finally won the Tokyo Marathon. "I am tired. It was a tough race. I wanted to get away from my competitions in the early stage of the race. I did not want the race to come down to a final sprint. I think I broke away from Tatyana around 39km," recalled Schar at the post-race press conference.