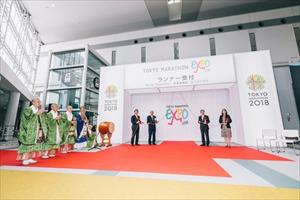 The opening ceremony of the Tokyo Marathon EXPO 2018 started at 10:45 am on Thursday February 22 in the Tokyo Big Sight. Following the opening ceremony, runners' registration began at 11:00 am and at the same time the EXPO opened its door to a general public.

Following the introduction of the guests, Koji Sakurai of Tokyo Marathon Foundation gave an opening address, in which he said: "Tokyo Marathon 2018 will be held in three days. With the introduction of the new course last year, a fantastic time was recorded. The world class time of 2:03 marathon, not very common in most other marathon races, were recorded. The Japanese runners also tried hard. Although they did not threaten the Japanese national record last year, the runners have improved in the span of a year and they will be challenging the national record again this year. Furthermore, this year the race has been designated as one of the MGC (Marathon Grand Championships, 2020 Olympic Marathon Trials) qualifying races. In the EXPO area, the race sponsors have scheduled many events in the next three days and over 120 booths are waiting for your visits."

Next, once again along with the beat of Japanese drums five monks of Zojoji temple prayed for safety and successful run this time for all the runners. Finally vail opening ceremony was conducted by Koji Sakurai, Akiyoshi Yamamura, the president of the Tokyo Metro, Toshihiko Seko, the JAAF Marathon Build Up Project leader and Megumi Oshima, the Sports Legacy Program Ambassador. At the end of the ceremony the gate was opened and the runners have entered to start a check-in process while the EXPO opened its door to a general public.

Many of the booths in the EXPO not only exhibits running related goods, but also sell them at site. The booths from other mass marathons are also inviting the runners to attend their events. The runners` registration officially started at 11:00 am on Thursday February 22 at the Tokyo Big Sight, and will continue through the early evening hours of Saturday February 24. The Expo also runs through Saturday and public are encourage to attend them. 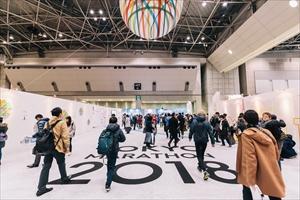 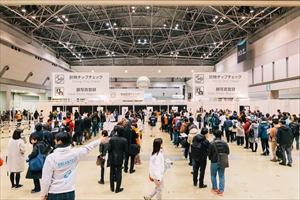