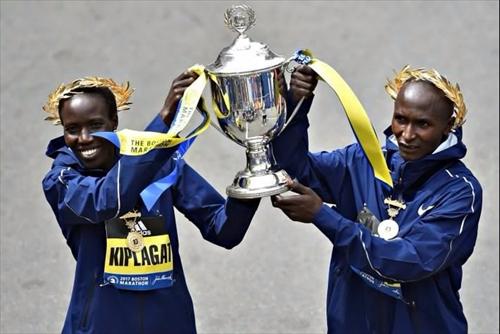 John Hancock today announced the return of 2017 Boston Marathon champions Edna Kiplagat and Geoffrey Kirui for the 122nd running of the race on April 16, 2018. The 2018 Boston Marathon marks the 33rd year of John Hancock's landmark sponsorship of the legendary race.

• Kiplagat is a two-time IAAF World Championships gold medalist, a London and New York City Marathon champion and a multiple winner of the Abbott World Marathon Majors Series.
• In her Boston debut this year, she decisively threw in a surge with 10K to go and ran away from the lead pack to finish in 2:21:52, the fourth fastest women's winning time in the history of the race.
• After Boston, she returned to the World Championships for the fourth time and secured the silver medal for Kenya. She is the second athlete in history to win two gold medals and a silver at the championships.
• She recently closed the 2017 race season with a strong fourth-place finish at the New York City Marathon.

"I am so happy to accept the invitation from John Hancock to return to Boston next year as the defending champion of this historic race," said Kiplagat. "After racing all around the world, it was so special for me to run on Boston's historic course and experience the Boston traditions with my family. I could see firsthand how special the city of Boston, all the towns along the course, and the community is to so many people. And of course, I look forward to the challenge next April of once again racing against the world's best athletes."

• Last year the chase for the men's title was aggressive with a deep international field of Olympic medalists, World Champions, and Abbott World Marathon Majors winners battling for the crown. A newcomer to the course, Kirui ran a strategic race, slowly diminishing the lead group down to himself and American Galen Rupp, who was also making his Boston debut after earning the bronze medal at the 2016 Olympic Games. Kirui, in only his third marathon, ultimately prevailed becoming the first Kenyan winner since 2012.
• At the World Championships, Kirui solidified his prowess in strategic, non-paced racing by decisively winning the gold medal.

"2017 was a wonderful year for me with winning both Boston and the World Championships," said Kirui. "I'm happy to return to Boston to defend my title. The tremendous atmosphere, the great history and legendary course all suit me very well."

"When you run Boston, you join a legacy that is over a century in the making," said John Hancock Chief Marketing Officer Barbara Goose. "Champions like Edna and Geoffrey exemplify the determination, persistence and spirit that all runners demonstrate when they line up together in Hopkinton to achieve their goals."

"In their Boston debuts last April, both Geoffrey and Edna raced with confidence from the start, pulled away late, and solidified their spots in Boston Marathon lore," said Boston Athletic Association CEO Tom Grilk. "We're excited to welcome these world-class athletes back as part of the John Hancock Elite Athlete Team."
Additional elite field announcements will roll out over the next few weeks.

For additional information about the elite athlete program and sponsorship, please visitjohnhancock.com/bostonmarathon/sportspartnerships or follow @jhboston26 on Twitter.