Series XI of the Abbott World Marathon Majors resumes this Sunday, October 8, when world record holder Dennis Kimetto returns to the Bank of America Chicago Marathon for the first time since demolishing the course record in 2013.

Kimetto clocked 2:03:45 in the windy city four years ago and the following year became the first man in history to break 2:03 when he set the world record of 2:02:57 in Berlin.

But the former farmer from Kenya has struggled to find his form since then, finishing ninth in the Virgin Money London Marathon earlier this year.

By contrast, Kirui's career has revived in the last 12 months. He triumphed in Chicago last year after a tactical battle and a narrow sprint victory over 2015 champion Dickson Chumba. The former double world champion and 2012 Olympic silver medallist went on to place fourth in London this April and currently sits 10th on the Series XI leaderboard with four points.

Biwott will hope to make his mark on the standings after enduring a lean 18 months since he placed runner-up behind Eliud Kipchoge at the 2016 Virgin Money London Marathon. He later dropped out of the Olympic marathon in Rio and hasn't contested a full marathon since.

Lilesa's performance in Rio was altogether more eye-catching as the Ethiopian chased Kipchoge to the finish line where he made a gesture of protest against the Ethiopian government that led to his exile in the United States.

Lilesa ran his career best in Chicago when he was second in 2012 and he won the Tokyo Marathon in 2016, but, after placing 12th in London this spring, he is seeking his first points in Series XI.

Former Amsterdam champion Bernard Kipyego will also be one to watch, as will USA's own Olympic bronze medallist and 2017 Boston runner-up Galen Rupp, and the world half marathon record holder Zersenay Tadese from Eritrea, whose official marathon best of 2:10:41 is long overdue for improvement. 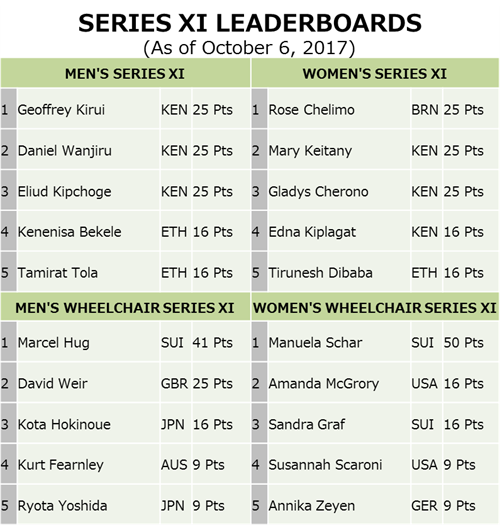