Thrilling Showdown in prospect at the BMW BERLIN-MARATHON on Sunday

The Olympic champion Eliud Kipchoge, defending champion Kenenisa Bekele and the former world record holder Wilson Kipsang are ready for a world record chase in the 44th edition of the BMW BERLIN-MARATHON on Sunday. The three strongest marathon runners in the world want to break the world record of 2:02:57 which Kenya's Dennis Kimetto set three years ago in Berlin.

A record number of 43,852 runners from 137 countries have entered the 44th edition of the BMW BERLIN-MARATHON. The race, the biggest one-day sports event in Germany, is an IAAF Gold Label event and one of the Abbott World Marathon Majors series.

With three contenders who have each run under 2:03:30 the BMW BERLIN-MARATHON has extraordinary strength in depth. Kenenisa Bekele of Ethiopia triumphed last year beside the Brandenburg Gate in 2:03:03, the second fastest performance of all time while Eliud Kipchoge ran his best of 2:03:05 to win London in 2016 and his fellow Kenyan Wilson Kipsang finished second in Berlin last year in his best time of 2:03:13. Another feature they have in common is that they all know what it feels like to stand on top of the podium as winners in Berlin.

Given what are likely to be excellent weather conditions an extremely fast race is in prospect. "We haven't finished working out what times the pacemakers are going to aiming for. But it will definitely not be slower than last year," said the race director Mark Milde. In 2016 the leading group went through halfway in 61:11.

On Monza's Formula One circuit in early May, Eliud Kipchoge ran 2:00:25 but this was in an event which didn't confirm to international rules. Speaking at the Friday press conference, Kipchoge commented: "For me this marathon was a big success and I have drawn a lot of motivation from it. I want to run the first half in 60:45 on Sunday." Kipchoge moved to the marathon four years ago. A year before winning the Olympic title in Rio, he won the BMW BERLIN-MARATHON in 2015 despite having to cope with problems from flapping insoles in his shoes, running 2:04:00. "Victory on its own is no success - it is simply a necessity. There are three of us and there will be only one winner," said Eliud Kipchoge.

"I think I can run faster than last year," said Kenenisa Bekele, who would complete a historic achievement if he broke the world record in Berlin. No runner in the history of athletics has ever held the world records for 5 and 10,000m and the marathon at the same time. But he won't be following Eliud Kipchoge's example and going off fast. "60:45 has no place in my plans. I shall follow the lead if I can. That way I shall not put myself under stress and listen to my body. I am well prepared," said Kenenisa Bekele.

Wilson Kipsang wants to run faster than last year. "This time it's a different situation, there are three of us," said the Kenyan, who lost last year's duel to Kenenisa Bekele. "The pacemakers are stronger this time. I believe we shall have more support. A halfway split of between 61:00 and 61:10 would be good for me," said Wilson Kipsang. In 2013 he set a world record of 2:03:23 in Berlin and his winning time of 2:03:58 in Tokyo leads this year's world rankings. Kipsang arrived here with his wife and their young daughter. Last year he had his son with him. "The fact that they are in Berlin is extra motivation for me."

A knee injury has forced the Kenyan Patrick Makau, winner of the 2011 BMW BERLIN-MARATHON 2011, to withdraw from Sunday's race. Makau ran what was then a world record of 2:03:38 to win the title. 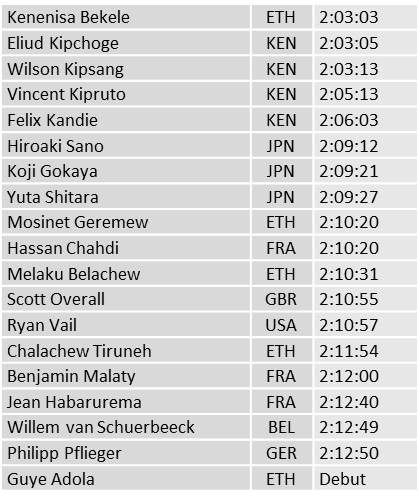