Gladys Cherono is ready for another sub 2:20 performance

The women's elite field for the BMW BERLIN-MARATHON on Sunday is ripe with talent, featuring five runners whose personal best is under 2:25. Gladys Cherono is the favourite among this quintet, having already won the race in 2015 with a world-class time of 2:19:25, going within 13 seconds of breaking the course record, set in 2005 by the Japanese Mizuki Noguchi (2:19:12). A record number of 43,852 runners from 137 countries have entered the 44th edition of the BMW BERLIN-MARATHON. The race, the biggest one-day sports event in Germany, is an IAAF Gold Label event and one of the Abbott World Marathon Majors series.

Although Gladys Cherono is the only runner to have broken 2:20, four of her rivals have gone under 2:25: the Ethiopians Amane Beriso (2:20:48), Gulume Tollesa (2:23:12) and Ruti Aga (2:24:41) as well as the Kenyan Valary Aiyabei (2:21:57). "It's the norm that leading women runners come to Berlin in order to run fast and have the best chance of setting personal bests. So we can reckon with a pace on schedule for breaking 2:20 on Sunday. It could even be the kind of pace to threaten the course record," said race director Mark Milde.

Gladys Cherono wants to show she is back to her best by producing a world-class time at the BMW BERLIN-MARATHON. "I've come to Berlin to attack my personal best," said Cherono. The 34-year-old Kenyan achieved the fastest marathon time anywhere in the world since April 2012 with the performance she produced in Berlin in 2015. But a lengthy period of injury in the spring of 2016 put paid to chances of going to the Olympics. "I couldn't run a marathon in 2016 because I had a stress fracture and feared I might never regain top form. But now everything is ok," said Gladys Cherono.

Another Kenyan who plans for a very fast race is Valary Aiyabei. The 26 year-old had a breakthrough performance in Prague this spring. She improved by almost three minutes to 2:21:57 after running the first part of the race at world record pace. It was the third marathon win in a row for Valary Aiyabai, who recorded first places in Barcelona and Valencia in 2016. „My aim is to equal the time I ran in Prague, but I hope for a personal best. My husband, who is also my coach, will pace me on Sunday. He is my everything," said Valary Aiyabai.

Another who has come to Berlin to run fast is Amane Beriso. The 25 year-old Ethiopian holds a personal best of 2:20:48 from Dubai last year, when she took second place. She confirmed fine form this spring when she was second in Prague behind Valary Aiyabai in 2:22:15.

Germany's Anna Hahner admits that she is not yet at her best after a long injury break and will not be able to challenge her personal best of 2:26:44. „But the qualification time of 2:32:00 for the European Championships next year in Berlin is a goal," said Anna Hahner.

Swiss record holder Maja Neuenschwander hopes to produce at least a similar performance to that of two years ago when she ran the national record of 2:26:49 in Berlin. „Conditions are always superb in Berlin. If you come here you simply have to make use of these conditions and run as fast as possible. I am looking forward to Sunday and may be I can run a PB," Maja Neuenschwander said. 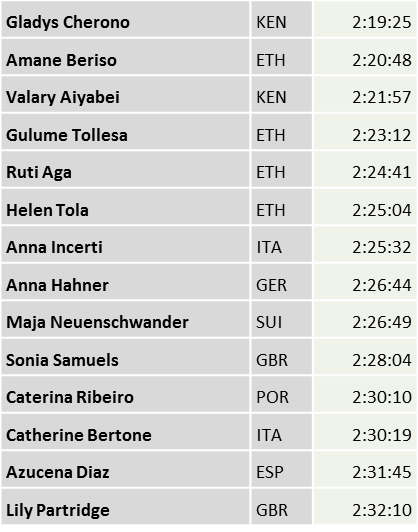