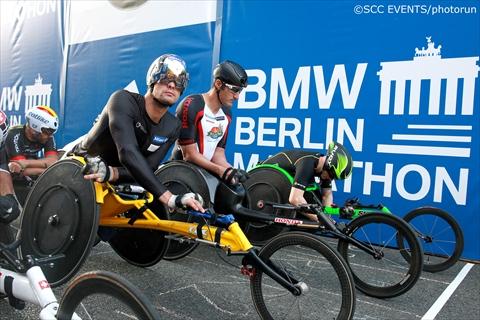 Some of the best wheelchair athletes in the world will compete at the 2017 BMW BERLIN-MARATHON. With Marcel Hug, Manuela Schär (both of Switzerland), Hiroki Nishida and Kota Hokinoue (both of Japan), as well as Tatyana McFadden(USA), some of the current top wheelchair athletes in the world will be at the start of the BMW BERLIN-MARATHON on September 24. Hug, who rolled into the world's elite two years ago as a shooting star, lost against his British competitor David Weir in a sprint at the Virgin Money London Marathon in April; he hopes to gain back some points in Berlin. Last year he won the marathon in the capital, and he is the man to beat in this prestigious race. Kota Hokinoue won in Berlin in 2014, and Hiroki Nishida finished third last year.

Heinz Frei, a wheelchair legend with 20 victories in Berlin, is quasi a constant at the event. At age 59, he is still one of the best in the world. He won his first BERLIN-MARATHON in 1985.

Manuela Schär, who won in Berlin in 2016, collected her first 25 points in the current Abbott World Marathon Majors Wheelchair Series 2017/18 at the Virgin Money London Marathon in April and will be up against one of the top wheelchair athletes, Tatyana McFadden of the USA. McFadden, who has been competing primarily in the USA, will have to beat the Swiss woman if she wants another overall victory at the prominent series, as her best chance to distance herself from her competition is with a direct face-off (see below).

The wheelchair race will get underway half an hour before the runners, at 8:45 am on Sunday, September 24.

The Abbott World Marathon Majors Wheelchair Race Series has the same format as the runners' series. The athletes collect points according to their rankings at the six Abbott World Marathon Majors races as well as at the IPC Athletics World Championships and Paralympic Games, whichever takes place in that year. The wheelchair series began in April 2016 at the Boston Marathon and ended at that race in 2017. The winners of this first series were Marcel Hug (Switzerland) and Tatyana McFadden (USA). The 2017/18 AbbottWMM Wheelchair Series began at the Virgin Money London Marathon and will end there in April 2018.

The male and female athletes with the most points at the end of the one-year series is declared champion. However, each athlete can only include points from five races, and to be in the running, must have competed in at least five races in the series. If an athlete collected points in more than five races, only the top five count. The top man and woman champion of the Abbott World Marathon Majors Series each receives a prize of $50,000.

You can also view the current rankings at the AbbottWMM website: www.worldmarathonmajors.com