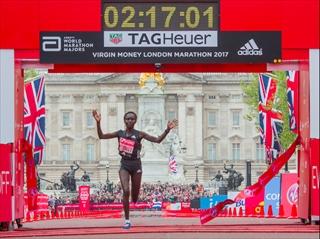 In the wheelchair race, Manuela Schãr (SUI) broke the wheelchair course record to clinch her first ever London title, and David Weir (GBR) became the most successful athlete in the event's 37-year history with his seventh win.

As part of the new AbbottWMM charity program, a total of $40,000 will be donated to charities in honor of today's four 2017 London Marathon champions. More information on selected charities will be released soon.
read more