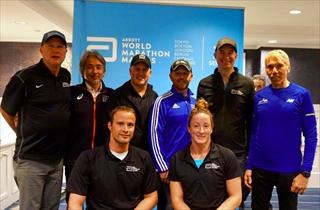 The athletes won the titles based on their performances, over the past 12 months, in the world's most renowned races that comprise the Abbott World Marathon Majors - the Tokyo, Boston, Virgin Money London, BWM Berlin, Bank of America Chicago, and TCS New York City Marathons - as well as the Olympic and Paralympic Marathons.

"We are inspired by these amazing athletes determined to cross the finish line first and prove what's truly possible through good health," said Chris Miller, divisional vice president, global brand strategy and innovation, Abbott. "We are pleased to partner with the Abbott World Marathon Majors and celebrate all the participants who have worked so hard and achieved so much over the last year, including the men and women who competed in the first-ever AbbottWMM wheelchair series."

AbbottWMM will name a Series X women's champion once the doping investigation, and any potential appeal process, is complete for Jemima Sumgong, who currently leads the Series X standings. Any athlete who has been found guilty of any anti-doping rules enforced by the IAAF, WADA, National Federations or any of the individual AbbottWMM races is not eligible to win an AbbottWMM Series title.