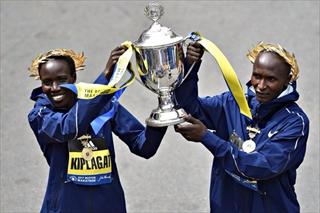 Kenyan and Swiss athletes were the winners today as Series X of the Abbott World Marathon Majors came to a thrilling conclusion at the 121st Boston Marathon with just six days to go before Series XI kicks off at the 2017 Virgin Money London Marathon on April 23.

Geoffrey Kirui and Edna Kiplagat broke clear of world class fields to win the men's and women's elite races for Kenya, while wheelchair racers Marcel Hug and Manuela Schär made history for Switzerland as they took advantage of the warm conditions and light tailwinds to record the fastest wheelchair marathons ever seen.

Hug has dominated the inaugural AbbottWMM wheelchair series and he ended it in style with his seventh win from the eight-race, year-long contest, followed a few minutes later by Schär who closed the gap on series winner Tatyana McFadden to 18 points with a superb solo victory.

Twelve months ago, Hug held off Ernst van Dyk and Kurt Fearnley on the line as he started a winning streak that brought him Paralympic gold in Rio, plus victories in London, Berlin, Chicago and New York. This time, it was only 10-time Boston winner Van Dyk who could stay with the Silver Bullet as he fired away from the rest of the field to clock 1:18:04.