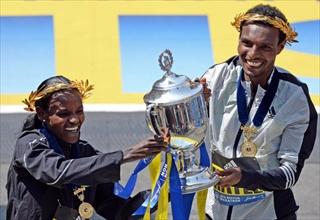 Veteran champions will lead an impressive professional field April 17 in Boston, at the conclusion of Abbott World Marathon Majors Series X of the 11-year-old 'grand slam' of marathon running, in which male and female athletes score points for their finishing positions at six of the best-known big city marathons in the world, plus those held at World Championships and Olympic or Paralympic Games.

With just one race to go, the AbbottWMM Series X women's title is up for grabs as Eliud Kipchoge, Marcel Hug and Tatyana McFadden have clinched, respectively, the men's, men's wheelchair and women's wheelchair Series X crowns.

Ethiopian Baysa currently has 25 AbbottWMM points from her 2016 victory, which kick-started the eight-race Series X campaign 12 months ago. She could be in a position to claim an AbbottWMM title if she wins on Monday, putting her in a tie with Jemima Sumgong.