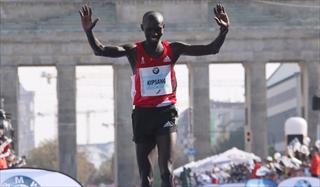 Olympic champions Eliud Kipchoge and Jemima Sumgong could see their commanding leads in the Abbott World Marathon Majors cut to nine points when Series X resumes at the Tokyo Marathon this Sunday, February 26.

Former world record holder Wilson Kipsang and 2014 Tokyo Marathon champion Dickson Chumba can leap to second on the men's leaderboard with 41 points if either of them wins Sunday's race, the seventh event in the year-long eight-race contest to find the world's best marathon runners and wheelchair athletes.

With the Series due to reach its conclusion at the Boston Marathon on April 17, Kipchoge appears unassailable on 50 points thanks to his majestic back-to-back victories at the Virgin Money London Marathon and Rio Olympic Games.

But Kipsang, who was second at the BMW Berlin Marathon in September, and Chumba, runner-up in October's Bank of America Chicago Marathon, will be vying to add another 25 points to their totals on the revamped Tokyo course.

Kipsang ran the fifth fastest time in history five months ago when he clocked 2:03:13 in Berlin and has vowed to target Dennis Kimetto's world record of 2:02:57 on the new Tokyo route made flatter and faster by the elimination of a number of bridges.

Chumba's course record will certainly be under threat as six men in the elite field hold personal bests quicker than the existing mark of 2:05:42.

Chumba's own PB stands at 2:04:32, making him the second quickest in the line-up ahead of Ethiopia's Series VII World Marathon Majors champion Tsegaye Kebede who has a best of 2:04:38. He set the Japanese all-comers' record of 2:05:18 in 2009, another set of figures that could be eclipsed by the end of Sunday's race.

Fellow Ethiopian Tadesse Tola (2:04:53), the 2013 world bronze medallist, plus Kenyan pair Bernard Koech (2:04:53) and Evans Chebet (2:05:31), will also be in the hunt for points. Victory for Chebet, who finished third in Berlin last year, would move him up to joint second level with Kenenisa Bekele on 34 points.

Sumgong is sitting pretty on 50 points at the top of the women's leaderboard thanks to her wins in London and Rio, but Birhane Dibaba will close the gap if she reclaims the Tokyo title she won two years ago.

The Ethiopian is seventh on 16 points after placing second in Berlin and could move to second above Florence Kiplagat with a 25-point victory on Sunday.

Dibaba ran her best time of 2:22:30 when runner-up in Tokyo in 2014, but she'll face stiff opposition this year from a trio of quicker runners.

Kenya's Lucy Kabuu is the fastest on paper thanks to her PB of 2:19:34, although that was five years ago and the Kenyan hasn't raced a full marathon since January 2015.

Ethiopians Amane Beriso and Amane Gobena should also be in the running. Beriso was second at the Dubai Marathon last year in 2:20:48 while the experienced Gobena ran her best of 2:21:51 to finish runner-up in Tokyo 12 months ago.

The inaugural Abbott World Marathon Majors Wheelchair Series also returns in Tokyo where Switzerland's Marcel Hug is looking to maintain his 100 percent record and stay on course for a clean sweep of Series X races.

With six wins out of six, Hug is assured of the men's prize when the series ends in Boston, but the 'Silver Bullet' is determined to keep hitting the mark in his quest for the perfect eight.

In Tokyo he will face South Africa's 10-time Boston Marathon champion Ernst van Dyk, who was second in this race last year, plus 2015 world champion Joshua George of USA. They lie third and fourth in the table beneath Australia's reigning Tokyo champion Kurt Fearnley who sits this one out.

Series leader Tatyana McFadden faces her Rio nemesis Zou Lihong of China in the women's race. Zou pipped the American superstar to Paralympic gold in September, inflicting a second defeat of the year on McFadden after she had lost in Tokyo last February to Japanese favorite Wakaka Tsuchido.

McFadden will be looking for double redemption this time as she seeks to extend her Series X lead over Manuela Schär. She has 116 points with four wins out of five so far, while the Swiss racer is just 27 adrift on 89.

Schär clinched the Berlin title in September, and has consistently been runner-up behind her US rival. She should be the main challenger again.

Rio bronze medallist Amanda McGrory has also been in McFadden's shadow this year. She lies third on 32 points ahead of Zou. Seventh-placed fellow-American Susannah Scaroni could also challenge for a podium place.